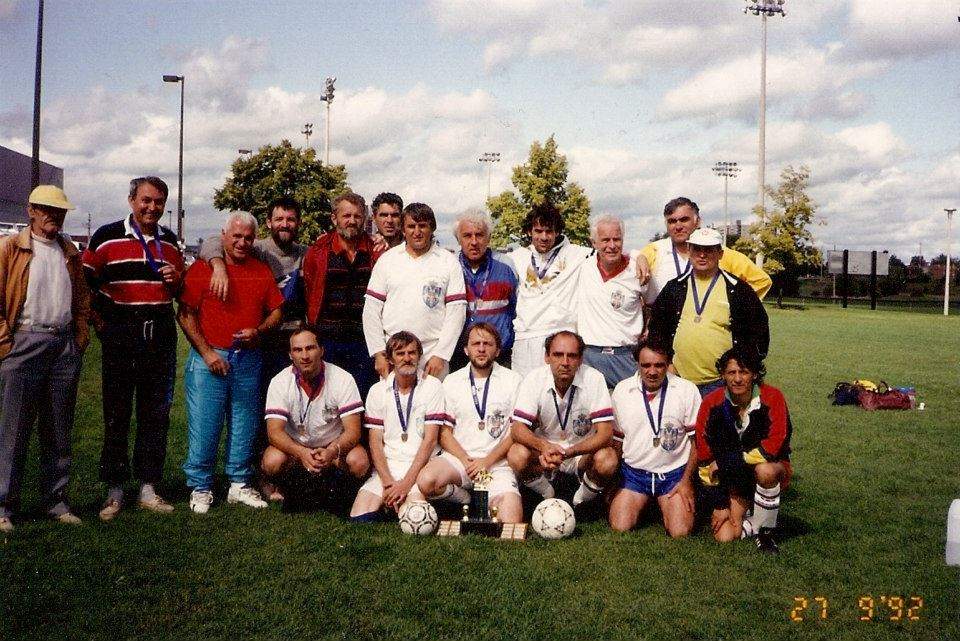 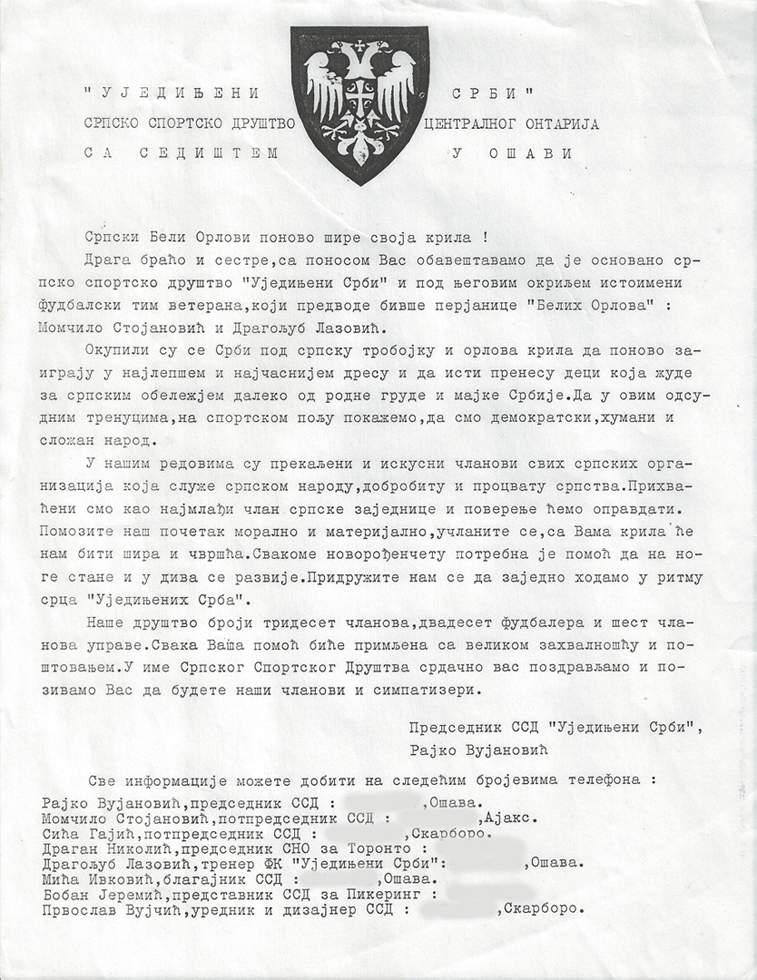 An interesting photo and flyer from 1992 has come into our possession.

Namely, it is about a team that competed in the transitional period between 1980 and 2006 when Serbian White Eagles FC did not officially compete.

Back in 1992, the Serbian Sports Association of Central Ontario was founded with headquarters in Oshawa, and the main club of the sports association was the United Serbs Football Club from Oshawa. The team played in white jerseys with the Serbian crest and crown, the symbol of the Serbian White Eagles. Among the famous players was Momcilo “Mike” Stojanovic, the former goalscorer of the White Eagles when they were first in the NSL and the coach of the team was Dragoljub Lazovic – another former player of the White Eagles.

The club participated in the Central Ontario Senior League. The club won many matches and beat several teams with a margin of more than ten goals. The United Serbs lifted the trophy in their league, winning gold medals awarded by the Durham Region Soccer Association.

In the summer of 1992, a tournament was held at the beautiful Masaryktown park in Scarborough. First place was won by Hamilton Serbia, who had two victories. Second place was taken by a team of senior players from Toronto and Brampton, and third place went to United Serbs from Oshawa. The best player in the tournament was Zoran Ristic from Hamilton, while the captain of the winning team, Dusan Pejcic, received a transitional cup to decorate the Hamilton Serbia trophy cabinet. All matches were refereed by Vitomir Spasic.

“The Serbian White Eagles are spreading their wings again!

Dear brothers and sisters, we are proud to inform you that the United Serbs Serbian Sports Association has been founded and under its auspices the eponymous football team of veterans, led by former White Eagles wingers Momcilo Stojanovic and Dragoljub Lazovic.

Serbs have gathered once again under the Serbian tricolour and eagle’s wings to play in the most beautiful and honourable jersey and to pass it on to the children who yearn for Serbian symbols far from their native home and mother Serbia. Let us show in these critical moments, on the sports field, that we are a democratic, humane and harmonious people.

Our ranks include experienced veteran members of various organizations that serve the Serbian people and the well-being and prosperity of Serbia. We have been accepted as the youngest member of the Serbian community and we will justify the trust bestowed upon us. Help our beginning morally and materially, become a member, with you our wings will be wider and stronger. Every newborn needs help to stand on its feet and develop into a giant. Join us to walk together to the rhythm of the heart of the United Serbs.

Our club has thirty members, twenty footballers and six administration members. Any help from you will be received with great gratitude and respect. On behalf of the Serbian Sports Association, we warmly welcome you and invite you to be our members and supporters.”