Article and photographs by Djuradj Vujcic 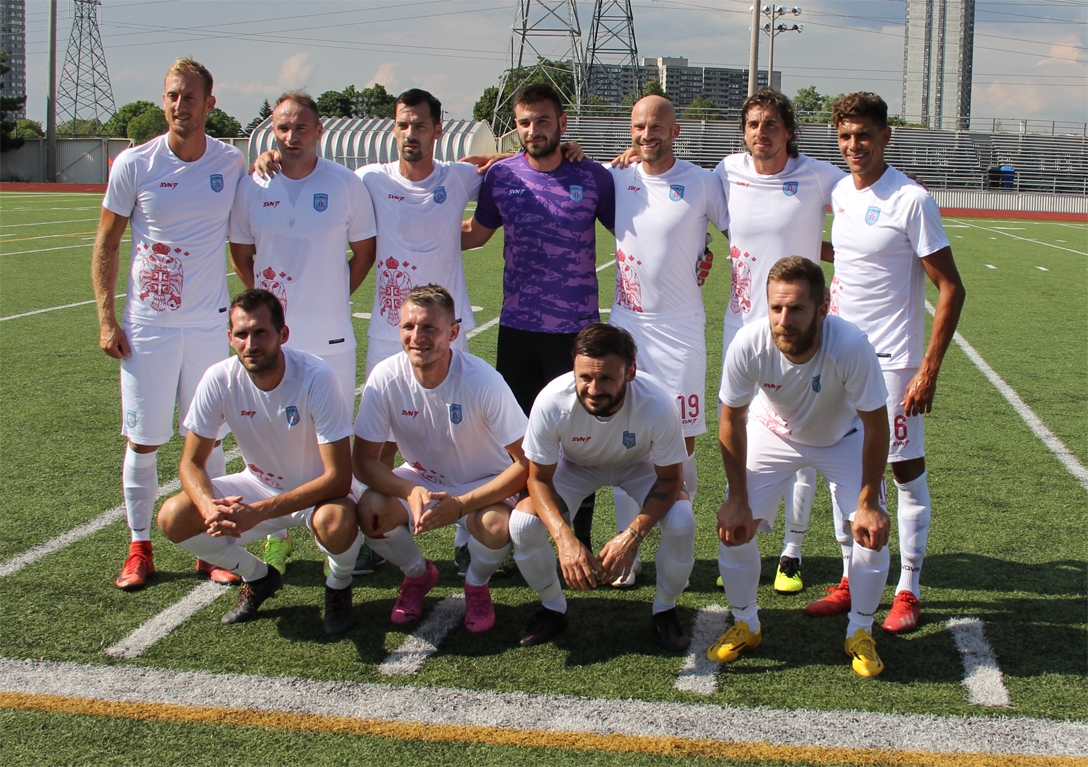 In the 2022 Canadian Soccer League semi-final, played on a very hot and sunny day (August 20) at Esther Shiner Stadium with a start time of 4:00 PM, the Serbian White Eagles fell short to FC Continentals who came out on top with a 2-0 victory.

The game started well for the Serbian White Eagles with numerous chances coming from Nikola Djurkovic, Adrian Cann and Marko Krasic early on but Continentals goalkeeper Anatoliy Starushchenko brought his A game. Continentals midfielder Bogdan Borovskyi hit the crossbar early on in the fifth minute. Disaster struck in the 28th minute when goalkeeper Marko Kostic was shown a straight red card for handling the ball outside the box – resulting in a free kick. The Serbian White Eagles (without a backup goalkeeper on the night) were forced to pull back Bojan Zoranovic (who also serves as an assistant coach with the club) from his forward position. In the 31st minute, Continentals captain Serhiy Ivlyev took the free kick which bounced off the Serbian White Eagles wall and right to Bogdan Borovskyi who found the back of the net making it 1-0 for FC Continentals. Marko Pavicevic responded with an inspired strike in the 36th minute which thrashed the crossbar. Bojan Zoranovic was solid in net and made many saves from good chances on the night.

Former Guyana national team player Shaquille Agard (who debuted for the club on June 18, 2022 in a 7–3 win over BGHC 1) entered the match instead of Marko Pavicevic in the 70th minute and looked solid on the ball up front.

Continentals made it 2-0 late in the game as Basel Rashrash scored from close range in the 78th minute and that would be too much too soon for the Serbian White Eagles who put up a valiant effort (at times dominating the match with a player down) but came up short. Soccer was harsh towards the Serbian White Eagles (who were first in the Regular Season) on this night as they were defeated by FC Continentals (formerly FC Vorkuta) in the semi-finals for the third season in a row. FC Continentals will play Scarborough SC in the championship final which will be held on August 27 at Lamport Stadium.

The Serbian White Eagles have an upcoming match in the first annual Enio Perruzza Memorial Trophy. The tournament is named after long-time CSL announcer Enio Perruzza who sadly passed away last January. More details will soon be published on our website.

Bojan Zoranovic shared his thoughts after the match:

“Simply put, that is soccer. I think that heads are still hot when it comes to analyzing the game and for some longer comments but I think we dominated the match for about a half hour prior to the red card. After that, the match went in a different direction and we immediately let in a goal from the free-kick and it was hard to come back from that. I would however like to congratulate our players on that second half where we dominated the match with a man down and with me – as a player – in net and it’s a dignified loss. As a coach in the team, I felt the need to take up that responsibility. Due to circumstances, we didn’t have a back-up goalkeeper so everything was the way it was. I think a good season is behind us where we first in the Regular Season. Unfortunately, playoff semi-finals are only one game so that’s it for this season when it comes to the CSL. We now look toward the Cup competition and we begin preparing for next season right now. I think we’ve made a respectable team when it comes to the players’ playing qualities and their human qualities. Around 7-8 players came over from Serbia and from Montenegro so we really have a good team where we all hoped to win the championship but unfortunately the better team doesn’t always win. When it comes to the Cup, we are now starting from scratch. We will surely try to win it and we hope for the best.”

The head referee on the night was Timur Qayoumi.

Player of the Match

The Player of the Match was Bogdan Borovskyi.